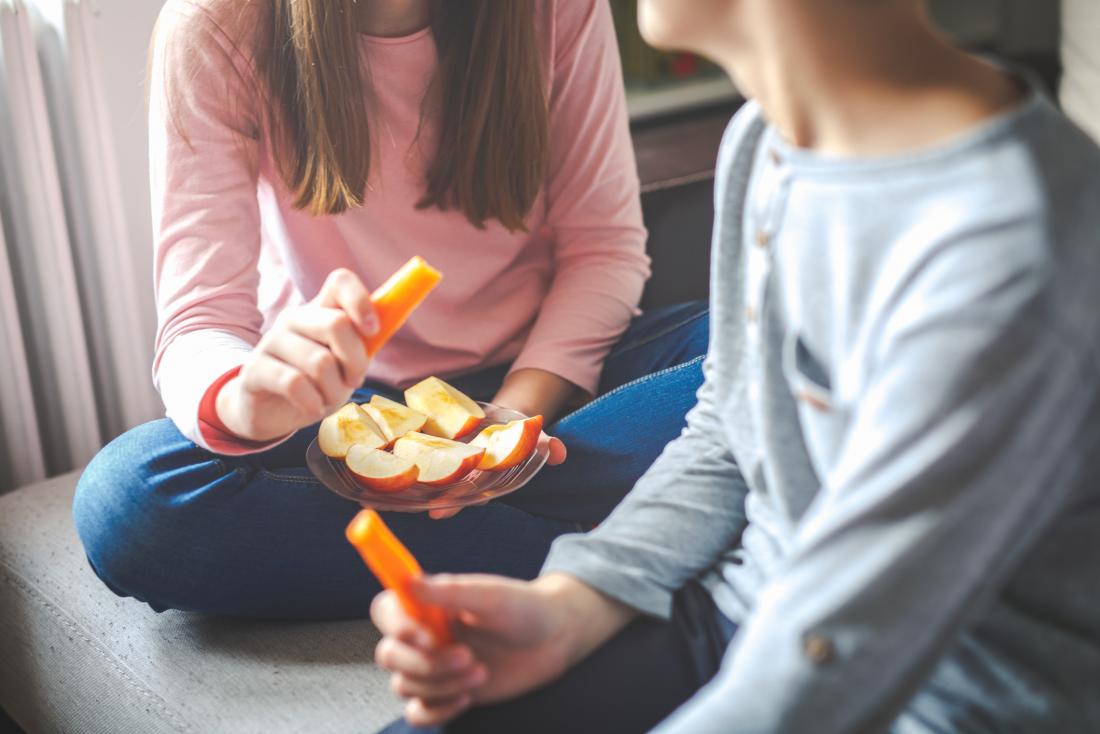 Replacing chips with carrots or apples can reduce feelings of fatigue.

When we are exhausted but need to stay awake, many of us reach for a sugary snack.

However, it is likely the more healthful options that can help fight the fatigue, suggests a recent study. Its findings now appear in the American Journal of Lifestyle Medicine.

It is important to point out that it is not a lack of self-control that results in people choosing unhealthful foods over healthful ones.

Rather, when a person has not had enough sleep, it affects their decision-making skills, leading to reduced willpower and a tendency to opt for a quick high in the form of sugar.

Findings from a 2019 study appearing in the Journal of Neuroscience suggest that not only are tired people more likely to want unhealthful food, but they are also more likely to spend more money on buying snacks.

Impaired brain functioning does not just result in a sugar craving, however; it also leads to cravings for anything high in fat, saturated fat, or sodium.

For many people, this may only happen occasionally. However, for people whose jobs involve long stretches of tiredness, reaching for unhealthful snacks can quickly become a regular occurrence.

A craving for unhealthful food

This can particularly affect physicians. Working long shifts with few breaks means needing to eat quick and convenient food. Much of the time, this food turns out to be unhealthful.

Maryam Hamidi, Ph.D. — a nutrition scientist and researcher at Stanford’s WellMD Center in California — has personal experience of such snack cravings.

A previous research task required her to stay awake from 8 a.m. till 5 a.m. over and over again. She kept both healthful and unhealthful snacks in her office but felt a craving for chips around 6 p.m. or 7 p.m.

“I started noticing these bags of potato chips in my office,” she says. “I had not craved chips since my undergraduate college years. One day I had one bag.”

“Then a diet Coke. And then I went for a second bag, and then a third. I was having fun. I remember thinking, ‘This is great. I should do this more often.'”

She adds: “I’d never eaten three bags of chips at once. But I’d also never been that sleep deprived.”

When it is not possible to alter work schedules, physicians and others working in similar environments may feel the same.

What many people may not realize is that sticking to a healthful diet can help diminish feelings of fatigue. Likewise, physicians may not consider the link between what they eat and the potential benefit for patient care.

After experiencing the unhealthful effects of long working hours firsthand, Hamidi — along with a team of other Stanford researchers — wanted to see just what impact diet could have on sleep deprivation levels.

They analyzed results from a wellness survey that 245 Stanford physicians took in March 2016. Three specific diets emerged: a plant based choice, a diet high in protein, and one high in sugar and saturated fat.

One of their findings was predictable: People following a diet high in saturated fat and sugar had increased sleep-related impairment (SRI) scores.

However, plant based diets lowered these scores. The researchers found no relationship between high protein diets and SRI scores though.

Therefore, eating more vegetables and cutting down on sugar and saturated fat may help an exhausted brain and body work better.

According to Hamidi, employers and organizations should try to ensure that foods such as fruits, vegetables, smoothies, and healthful protein bars take priority over sugary snacks and drinks.

“Increasing physicians’ access to [healthful] snack options close to their work areas and creating a work environment with many [healthful] options can help reduce their daytime fatigue,” she explains.

Ultimately, this could boost concentration levels and “improve the quality of patient care.”