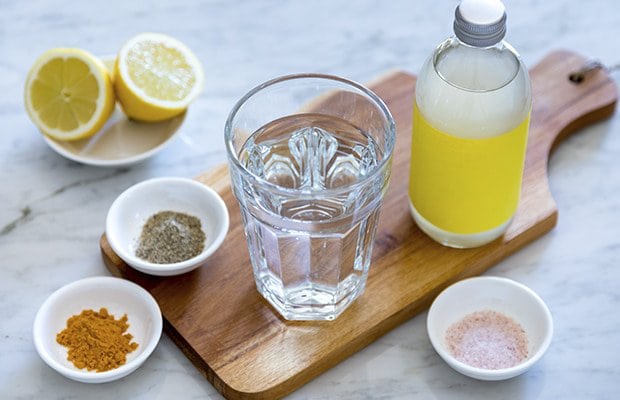 Nutritionists get the question all the time: Can drinking apple cider vinegar help with weight loss? But think about it for a sec: If chugging ACV daily and magically dropping two sizes sounds like BS, well, that’s because it is. Sure, if you’re using ACV to replace a calorie-bomb condiment like mayo, then it might help you lose ~some~ weight, says Leslie Bonci, dietician and the owner of Active Eating Advice. But that’s the case with any vinegar, not just apple cider.

“Apple cider vinegar is not this magical elixir that’s going to solve all of our problems,” says Amanda Baker Lemein, a dietician. There’s not much in the way of actual evidence that ACVcomes with any of the major health perks that some celebs (cough Kourtney Kardashian cough) swear they’ve experienced by drinking it. While consuming ACV has been touted as a positive health practice that can aid weight loss, regulate blood sugar, and lower cholesterol, it also can cause serious digestive distress in some, says dietician Eliza Savage.

If you still insist on seeing what all the buzz is about, adding a daily dose of ACV to your diet probably isn’t dangerous. Here’s what you can (and can’t) expect to happen to your bod according to three registered dietitians.

1/ You could have serious stomach issues

“Because vinegar is acidic, some people don’t tolerate it all that well,” says Bonci. Not everyone will experience this, but if you have ulcerative colitis, inflammation in your digestive tract, or are just prone to stomach aches, you’ll probably want to steer clear.

The bottom line: Bonci says vinegar — any vinegar — is a great option for adding flavour to food without skewing its caloric value. But it’s not a magic potion — so don’t expect a major transformation.

2/ You may experience significant changes in your BMs

BM, as in bowel movements. We’re talking poop, people. Because ACV is made from fermented apples, it contains pectin, “a soluble dietary fibre that acts as a natural gelling agent,” says Savage. Translation: The pectin in ACV can help to bulk up your stool, promote growth of good bacteria in the gut, and reduce inflammation. Sounds amazing, right?

But people that consume too much ACV could experience diarrhoea. “The ACV may pull water into the bowel,” says Savage. This means that your stool will come out watery and more frequently in the form of diarrhoea. Needless to say, a not-so-pleasant bathroom experience could await.

3/ You could compromise your kidneys

Another big Q about ACV is whether apple cider vinegar can hurt your kidneys. Well, Lemein cautions people with pre-existing kidney issues from consuming ACV. “There has been some research to show that if you do have any sort of weakened kidneys or immunocompromised kidneys, then consuming anything that is highly acidic is not going to be advised,” says Lemein.

READ MORE: Can You Use Apple Cider Vinegar To Cure A UTI?

4/ You could experience uncomfortable bloating

If you bloat during your period, then you know just how uncomfortable a swollen tummy can feel. And if you’re not a fan, then the ACV diet might not be for you.

“Consuming apple cider vinegar delays stomach emptying,” says Savage. This reduces the rate at which food leaves the stomach and enters the lower digestive tract, meaning you’ll feel fuller longer. At times delayed stomach emptying can cause temporary weight loss, Savage says. But it can also cause some serious bloating, gas and nausea. 10/10 would not recommend.

5/ You could worsen your acid reflux symptoms

“Anyone who has acid reflux will want to be cautious of overly acidic foods,” says Lemein. This includes ACV, which falls between a 2 and a 3 on an acidity scale of 0 to 7 (zero being the most acidic).

“I would argue that most people find that introducing more acid into their diet negatively affects their previously occurring issue,” says Savage.

6/ You may feel extremely weak

At the risk of sounding painfully obvious here, if you try to subsist mainly on ACV drinks, you’re going to get too few calories to function. “It really creates that sense of imbalance, big time,” says Bonci.

If you want to start consuming more ACV, Bonci suggests instead of having vinegar as part of a meal that also incorporates vegetables, protein, and carbohydrates, ideally as a replacement for a heavier dressing or seasoning. That way, your body will still get the fuel it needs — and you’ll save yourself a few unnecessary calories in the process.

7/ Your immune system may actually get worse

There is evidence to suggest that probiotics and healthy gut bacteria translate to a strong immune system. ACV is a fermented liquid, and fermentation holds probiotic properties, so it could be an immunity booster…right? Probably not, says Bonci.

Fermented foods can help increase good bacteria in your gut, she says, and some — like sauerkraut — do come in a vinegar base. But the vinegar alone probably isn’t going to pack the probiotic punch that you need to make a difference in your immune system. And Bonci says that if you go nuts with the ACV, you could push out other nutrients from your diet, which is actually bad for your immune system. Womp womp.

8/ You could lose weight — but only temporarily

That’s because any weight you’ve “lost” is primarily water weight, says Bonci. “So when you replace that water, your weight will come back on.”

If you do slim down on an ACV diet, it would be similar to any crash diet — so that rapid weight loss might end up slowing your metabolism and making it harder to shed pounds in the future, Bonci says.

Word on the street is that ACV is an appetite suppressant (FWIW, our writer who tried drinking it daily reported that she didn’t notice a change in how hungry she was). In fact, Bonci says people who drink a lot of diluted ACV might actually end up hungrier because vinegar is so low-cal.

“You feel full for the moment that you’re having it, because you’ve just consumed a gallon of water, but when you pee that out, you’re going to be hungrier, sooner,” she says.