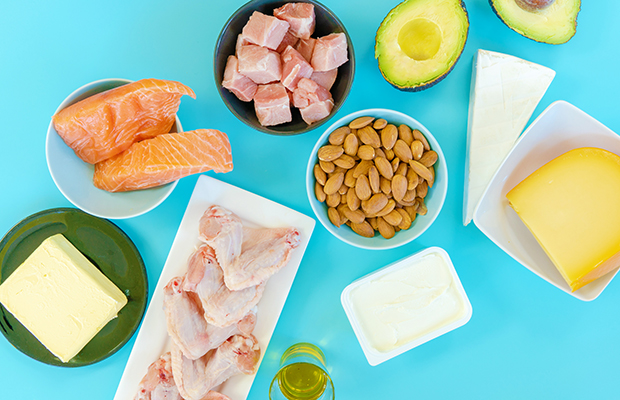 Athough eliminating bread is the hardest goodbye of all, low-carb diets have been the rage for quite some time now. There are a few different plans you can follow. Keto is a major one that’s yielding quick, drastic weight-loss results for tons of people, and Paleo is another trendy plan. And then there are the tried-and-true low-carb classics, like the Atkins diet (this might be the first time you’ve heard that one in a while).

Both keto and Atkins are actually pretty similar when it comes to the amount of macronutrients (fat, carbs, protein) you should be consuming day to day, but what are the actual differences between the two — and which would be a better fit, nutritionally?

Of course you could just make your choice based on how much pasta you’re able to eat, but nutrition experts do believe that one is a little bit better than the other for a few reasons. Two dietitians — Natalie Rizzo and Susan Piergeorge —give the lowdown on these high-fat, high-protein, low-carb eating styles. Their verdict, ahead.

“The ketogenic diet is a high-fat, low-protein and low-carbohydrate diet that was originally developed to treat epilepsy,” explains Piergeorge. That’s right, historically, it wasn’t prescribed for extreme weight loss but to reduce blood sugar — you can hardly have any sugar on the diet — which during the 1920s was thought to lower the risk of seizures. Now, the diet is a huge trend for weight loss as well as treating type 2 diabetes, Piergeorge adds.

Here’s the basic formula: Fat accounts for 70 to 95 percent of the keto diet, while protein makes up 5 to 20 percent, and carbohydrates just 5 to 10 percent of what you’re eating. It tends to bring on dramatic weight loss because you’re consuming less than 50 grams of carbs a day on keto, ideally.

At this ratio, the body starts to burn fat. “Once the body’s glucose stores become depleted, ketone bodies are produced (these are products of fatty acid oxidation in the liver) and provide an alternate source of energy,” Piergeorge explains. Basically, fat, instead of sugar from carbs, becomes your body’s main energy source — and when you’re burning fat, you lose weight.

READ MORE: Low-Carb Vs. Keto: What’s The Diff And Which Is Better?

What you can and can’t eat on the keto diet

Once you read this, you may be tempted to devour an entire charcuterie platter. But the focus really is on healthy fats and lean meats, and supplementing those with fruits and vegetables in moderate amounts, since those are technically considered carbs.

Foods to avoid on keto:

There are some potential health benefits you could experience by going keto. At the same time, the diet can have side effects, as explained below.

Well, if you’re trying to lose weight and have tried many other avenues to do so, eating keto may be effective. If you’re diabetic or pre-diabetic, it may also help lower your blood sugar since you’re cutting out all that sugar.

And, Rizzo adds, it could be a fit for some athletes, too. “Certain elements of the keto diet, like the emphasis on healthy fats and protein, is a good recommendation for active individuals who put a lot of wear and tear on their muscles and need more calories,” Rizzo says. You have to make sure the fats you choose are healthy, omega-3-rich fats instead of saturated fats, and that you’re choosing lean sources of protein.

Remember that before making a major lifestyle change, though, it’s best to check it out with your medical professional first. You don’t want to end up feeling worse after making this dietary switch instead of better.

READ MORE: Do You Really Need To Give Up Carbs To Lose Weight?

Basically, with Atkins, you generally have two paths you can choose from: Atkins 20 and Atkins 40, based on the grams of carbs you should be eating per day. It’s also low in carbs, higher in fat and higher in protein, which ideally should prompt the body to burn fat.

What you can and can’t eat on the Atkins diet

Like keto, Atkins focuses on lean protein, as well as healthy fats. “Depending on the plan individuals follow, the plan emphasizes consuming protein at least three times per day in 120 to 170-gram portions including meat, seafood, poultry and eggs,” Piergeorge explains. “Fats are encouraged, you want at least 3 tablespoons per day in the form of butter, mayonnaise, or olive or other vegetable oils,” she adds.

Foods to avoid or limit on the Atkins diet:

Health benefits and side effects of the Atkins diet

Just like keto, there are potential health benefits of the Atkins diet, as well as side effect you should be aware of before you try it.

Like keto, it may help an individual drop some serious kilos if it’s done the right way. And it can help lower your blood sugar if you have type 2 diabetes or are pre-diabetic.

Also, counting macros can be a good way to really boost awareness of what you’re putting in your body, especially if you are an athlete and want to make sure you’re fuelling properly for training. But, Piergeorge argues, a highly restrictive diet doesn’t work for everyone, and you should consult a doctor or nutritionist before beginning this strict regimen.

Recap: the biggest similarities and differences between keto and Atkins

Keto and Atkins may seem like the same thing when it comes to eating more fat and protein and less carbs and sugar, but there are some nuances you should keep in mind.

Is keto or Atkins better overall? The verdict…

Both keto and Atkins are highly restrictive diets, the experts point out, so it may be difficult to sustain these major lifestyle changes and cut out carbs for a long period of time.

Keto becomes tricky because it can be an unhealthy diet if you don’t do it correctly, and consume too many unhealthy fats (we’re talking cured meats instead of avocado). “I wouldn’t necessarily recommend the keto diet because it has such a high percentage of fat and a low percentage of carbs. It’s unsustainable in the long run, and there is too much of a tendency to eat a lot more saturated fat than you need,” Rizzo says.

If she had to choose between these two highly restrictive eating regimens, she’d choose Atkins because it allows for more carbs (in the form of fruits, veggies and whole grains) and ultimately more leeway in your eating and more balance in your diet.

Atkins also gives you more wiggle room because you can choose the 20, 40 or 100 option for allotment of grams of carbs per day. That way, you can introduce a little more pasta into the mix if that’s how you want to roll.

But it’s ultimately your decision — you’ll be making the dietary changes so they have to fit with your lifestyle and make you feel happy and healthy. Changing your diet (and especially eliminating the majority of carbs from your diet) is not easy, and may take some trial and error, so it’s important to thoroughly research all of your options.