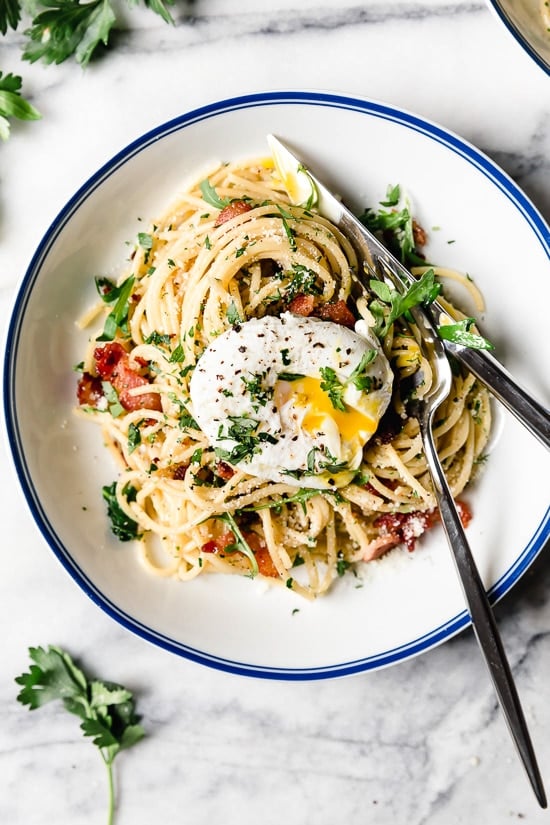 Carbonara is typically made with a raw egg that cooks when it hits the hot pasta, which often makes it pasty. My version is topped with a poached egg so the yolk is already warm when it tops the spaghetti. This creates a velvety sauce that blends easier — giving it richness without binding. Rather than using Pancetta here, I used leaner center-cut bacon and also added some greens to the mix – it’s beyond delicious! 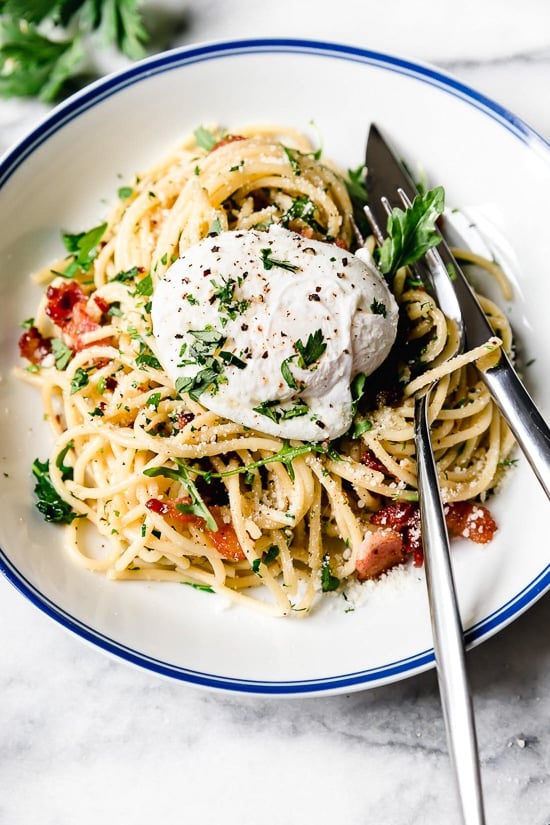 I recently went on the trip of a lifetime to Rome and the Amalfi Coast near Naples, Italy—the center of authentic Italian pasta manufacturing. It was an incredible experience and gave me a whole new appreciation for Italian pasta and their cuisine. While there we toured the oldest pasta factory in Italy, located in southern city of Gragnano in the Campania region of Italy. It’s located between the coast and the mountains—the ideal location for making and drying pasta, which also happens to be where they manufacture Dellalo Pasta. The experience was as dreamy as it gets, sharing great food with amazing friends while enjoying the stunning coastal views. On the tour, we visited the mill where Dellalo’s wheat is ground (grain has been milled since the 1200’s) and even took an Italian cooking class where we learned how to cook three authentic pasta dishes all using ingredients from Dellalo. To be honest, I never wanted the trip to end.

If you’ve been following me for a while, you know how much I love DeLallo Foods, a brand I’ve worked with for years. Why do I love Dellalo so much? For starters, they import only the best ingredients direct from Italy to the U.S. Here’s a few more reasons why DeLallo pasta is better than other brands you may find in the grocery store: 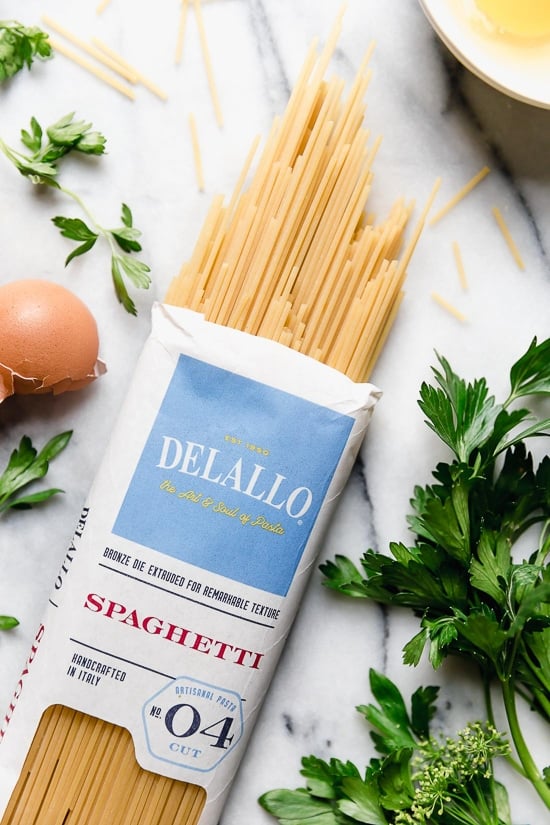 What is Spaghetti Carbonara?

Spaghetti Carbonara is an Italian pasta dish made from Rome made with egg, a combination of Pecorino Romano and Parmigiano-Reggiano, guanciale or bacon, and black pepper. Sounds complicated, but it’s actually quite simple to make. Although it’s creamy, it’s actually made without cream.

Traditional spaghetti alla carbonara, the egg yolk is added raw to the hot pasta and starts to cook on contact. The downside to this, unless you’re eating it immediately, the carbonara becomes dried out if you don’t eat it immediately. With the method of poaching the egg instead, is inspired by Crispo, my favorite Italian restaurant in NYC there’s no need to worry if the egg is still raw and the whole bowl of pasta doesn’t get all clumped together when you are ready to eat it. 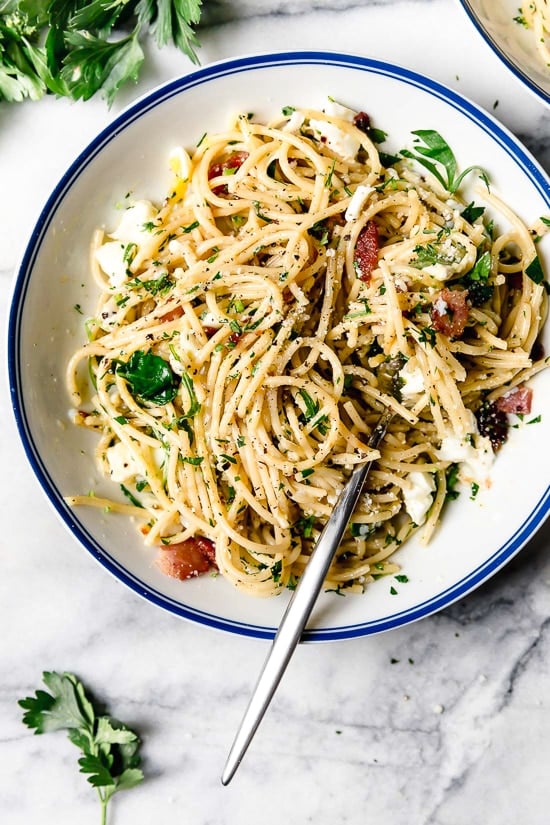 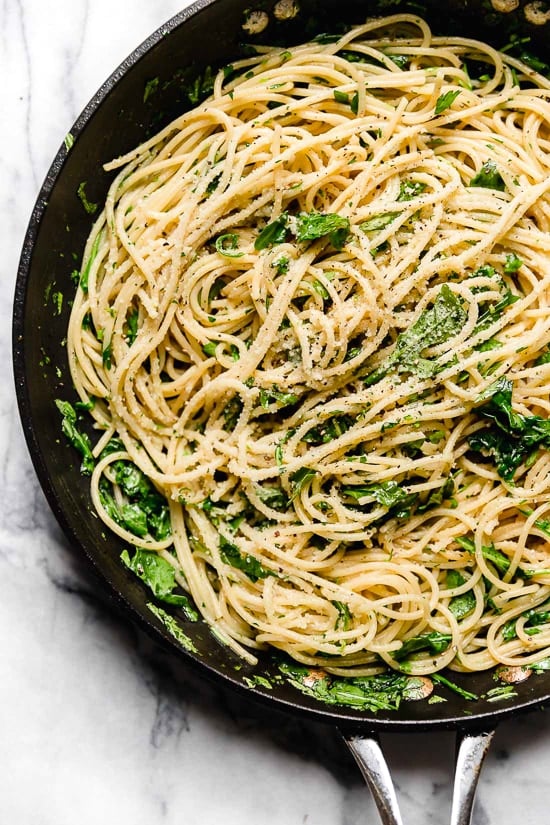 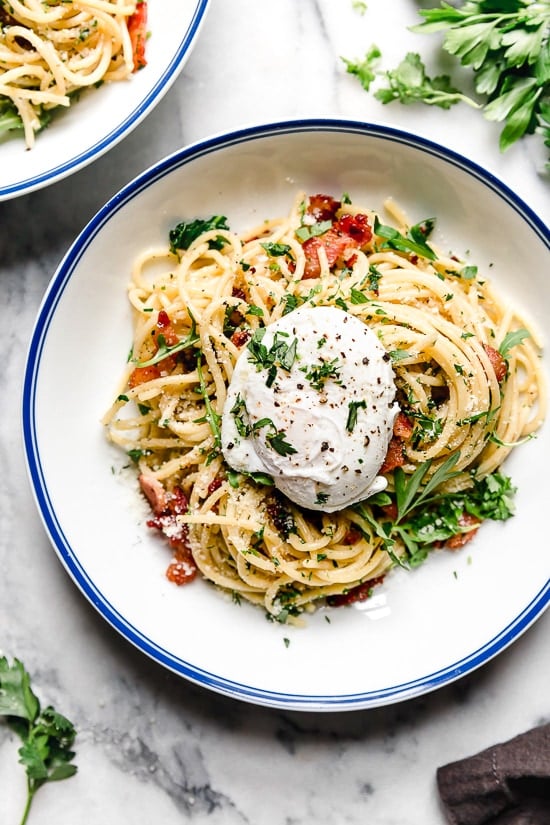 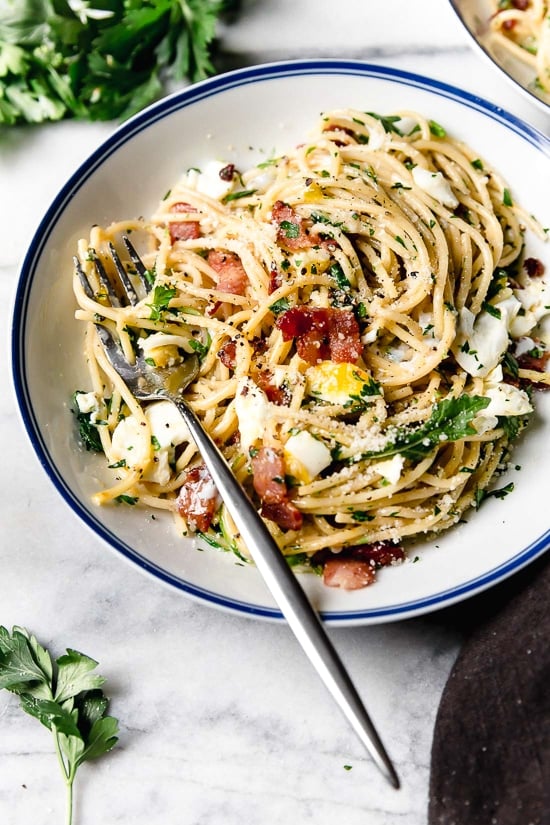 More Pasta Recipes You Will Love

Sponsored by DeLallo Foods. Thanks for supporting the brands I love that make Skinnytaste possible.